Invitation to a Consultation Event for the proposed redevelopment of land at West Hoathly Brickworks, Hamsey Road, Sharpthorne

Ashill Regen (AR) are now the freeholders of the former West Hoathly Brickworks, which is situated to the northern edge of Sharpthorne village. The Brickworks, which had been in operation since the late... Read More »

Community "What's on" and Directory 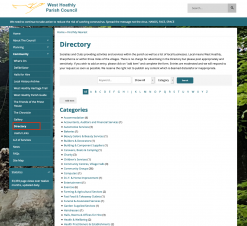 As part of the new WHPC website, we are very pleased to be able to offer a local Directory and "What's on" calendar as part of the Community page.

Local businesses, organisations and individuals are welcome to advertise on these pages free of charge. Local is defined as West Hoathly, Sharpthorne and within three miles of the villages. Advertisements from Forest Row will also be permitted if useful to... Read More » 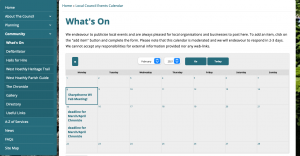 Your Parish Council is pleased to be able to offer a new service to local organisations, businesses and individuals.

We endeavour to publicise local events and are always pleased for local organisations and businesses to post here.

To add an item, click on the "add item" button and complete the form. Please note that this calendar is moderated and we will endeavour to respond in 2-3 days. We cannot accept... Read More »